HSCD Articles of Association and Bylaws 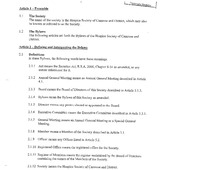 HSCD welcomes two new board members as of our 2021 AGM:
Nancy Howard and Evelyn Carrington

Thank you both for the gift of your time and talents.
We say thank you and farewell to two board members:
Janelle Wallace and Suzanne Nickel, as they move on
to other endeavours.

Pam is a retired nurse who spent many years as a palliative nurse consultant with AHS. She states that she has been privileged to meet many individuals and families at a difficult time in their lives and, hopefully, together with the health care team, made a difference for them.

She has a special interest in caring for people at end of life which was led her to working with the hospice society for the past 8 years. She is constantly amazed and grateful for the compassionate community we have here in Camrose.

Bryan works as an Accountant (CPA) at Grant Thornton in Camrose. While he does not have direct experience with hospice care, he believes that this is a valuable service that helps patients and their families get the best care possible through difficult circumstances. He is also a supporter in helping out in areas that benefit the community as a whole and is looking forward to bringing his accounting experience to the Treasurer position.

Selina, having been part of a family business, brings  to Hospice a background in business and labor relations. She has used these skills in her work with the finance and fundraising committees.

She raised her two sons in the Camrose area where she has been a long-time resident. In her years here she has also served on the library board and the Crime Stoppers board.

Janet was born and raised in Strome, Alberta and has great childhood memories, growing up with three siblings on a farm.  She became a teacher and married at the age of 20 (to Mike Gartner).  She then taught in Fort McMurray and Boyle before stepping back to raise four children.  They moved back to the family farm in 2001 and she started teaching Preschool in Strome and substituting.  She continues to teach Preschool, currently in Forestburg and Viking.  Janet also works with Flagstaff Adult Learning as a “Building Blocks” coordinator teaching literacy to parents and their children.  Janet has been a member of Mission to Many, located in Viking for 8 years.  This involves local and international mission work.  She worked in Honduras and Guatemala as she travels every two years.  Janet states that she is at that stage of life of caring for her parents (mom had a stroke two years ago and suffers from aphasia) and trying not to be the “helicopter parent” to her grown children (ages 20, 22, 24, 26) "The Hospice Society is of interest to me.  I feel I would gain so much knowledge and would like to think I could offer some back."

Communication Committee Chair
Diana Nelson-Findlay is a Home Care Nurse in Camrose. She grew up in Camrose and graduated from nursing in 1987. She worked in a variety of settings including ICU, ortho-trauma, and the burn unit at UAH and Texas.  Diana returned to Camrose in 2000 with a young family and started working for Camrose Home Care. It was during that time that Diana became familiar with the importance of a palliative approach to care for many clients and decided to complete a certification in palliative and hospice care through CNA. Diana's husband Pat is a teacher in Camrose and they have two daughters both of which have entered into the medical field.

Fund Development Committee Chair
Kevin has been a life long resident of Camrose. He is married to Nola and they have two children. He works in the agriculture industry at an equipment dealership. Kevin has a keen interest in the health and wholeness of the Camrose and area community and feels that the Camrose Hospice Society is a much needed branch of a healthy, whole community.

Nancy was raised on a chicken farm in Missouri. Her family was active in the local church and community and she was privileged to spend each July accompanying her parents at a church sponsored camp. She did her university training in Indiana where she earned a Business Administration degree and also became the wife of John A Howard who was studying for Pastoral Ministry. In 1973 they moved to Winnipeg where John pastored and Nancy worked and also gave birth to their children. In 1983 they moved to Camrose where John was a faculty member at Gardner College. Nancy was employed by The Bethany Group and did computer support for them until she retired in 2017. Nancy has continue to be active in her local church and has helped various organizations with computerization tasks.
From a young age, Nancy was aware how important it was to support those who were experiencing health concerns and have lost loved ones. Nancy had first hand experience when her husband died in 2016. She also saw what wonderful support a Hospice program was at the end of her parents lives. Nancy is looking forward to serving the Camrose area by being a part of the Hospice Board.

Evelyn lived in Viking for most of her life, where she was involved in business commitments and raised her children. Over the years she has volunteered on different executives including: the Curling Club, Chamber of Commerce and Day Care. Evelyn was also instrumental in attaining PSS (now FCSS) for the Town of Viking and Beaver County. In 1995 she trained and became an advocate for Beaver County Victim Services, and later became a Board Member. Evelyn discovered her passion while volunteering and with Victim Services, and remained involved for over 20 years. In 2017 she moved to Camrose, where still having a passion for helping people, she chose to train and become a Hospice volunteer. "I am proud to be associated with this wonderful group of caregivers, and I hope my experience, compassion for others , and input will be helpful as a board member of Hospice."