“Tears shed for another person are not a sign of weakness. They are a sign of a pure heart.”
― José N. Harris

If someone in your life has died you have our compassion. The path of grief is tiring, and can be difficult to navigate.
This page is a resource for you as you seek to make sense of your sorrow journey. The resources below, and on the previous page, will provide links to numerous websites that offer tools and information regarding  grief. As well, you will find references to books, articles, and videos addressing the themes of grief, and being well in grief.

Grief is a quintessential human experience; if we Love, if we have attachment, we will grieve. Below are resources created by caring people who understand grief and bereavement. We hope that you find support for your grief journey here.

Located at the HSCD office in the lower level of the Mirror Lake Centre, our resource library is a one-stop shop for topics related to palliative/end-of-life care, grief and bereavement, and caregiver concerns. Browse books, DVD’s, and pamphlets for adults and children.

No registration or fees are involved. Simply fill in the library clipboard with the material title, your name and contact info, and the date borrowed. And no late fees – keep the materials as long as you need them, and return them when you are done.

Psych Central - The Ball and the Box
https://psychcentral.com/blog/coping-with-grief-the-ball-the-box#1

The Center for Complicated Grief
https://complicatedgrief.columbia.edu/about-us/meet-our-team/katherine-shear-md/

Seniors' Centre Without Walls
A seniors’ centre from the comfort of your own home! This Edmonton PCN program offers a variety of interactive telephone-based social and health programming, free of charge.   Read more 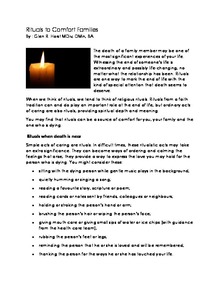 PDF
The death of a family member may be one of the most significant experiences of your life. Witnessing the end of someone’s life is extraordinary and possibly life-changing, no matter what the relationship has been. Rituals are one way to mark the end of life with the kind of special attention that death seems to deserve.

There is a hollow space
too vast for words
through which we pass with each loss,
out of whose darkness
we are sanctioned into being.

There is a cry deeper than all sound
whose serrated edges cut the heart
as we break open to the place inside
which is unbreakable and whole,
while learning to sing.

Healing the Pain of Grief and Bereavement

The pain of grief is as natural as the pain of child birth and is experienced by all humans and likely by other creatures, as well. Yet people are sometimes surprised by the severity of the pain they feel as a result of experiencing grief and bereavement.

Grief works: Stories of Life, Death, and Surviving
The Complete C.S. Lewis Signature Classics
I Wasn't Ready to Say Goodbye
Option B
I'm Grieving As Fast As I Can

The Power of Pain - The Bereavement Expert by Julia Samuel MBE

Julia Samuel MBE (Bereavement Specialist) If 25 years of experience has taught her one thing, it's that 'running away from grief means we never recover from it.' Warm, spirited and deeply compassionate, lauded psychotherapist Julia Samuel explains the connection between loss and mental wellbeing. Samuel, who has four grown-up children and four grandchildren, was a close friend of the late Princess Diana, and is godparent to Diana's grandson, Prince George. She recently published Grief Works: Stories of Life, Death and Surviving.

Understanding grief is an important part of healing after a loved one dies.

The journey through loss and grief | Jason B. Rosenthal

In her brutally honest, ironically funny and widely read meditation on death, "You May Want to Marry My Husband," the late author and filmmaker Amy Krouse Rosenthal gave her husband Jason very public permission to move on and find happiness. A year after her death, Jason offers candid insights on the often excruciating process of moving through and with loss -- as well as some quiet wisdom for anyone else experiencing life-changing grief. 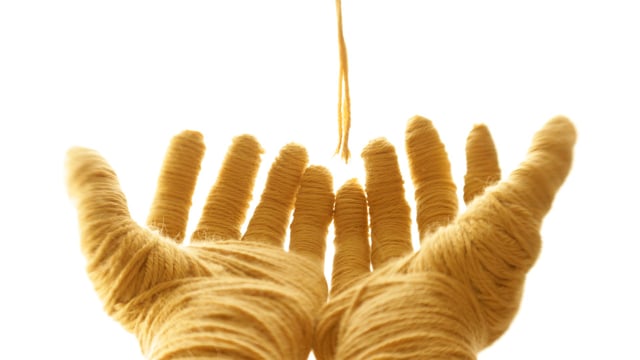 A beautiful video on living, dying, and letting go.

Joan Halifax: Compassion and the true meaning of empathy

Buddhist roshi Joan Halifax works with people at the last stage of life (in hospice and on death row). She shares what she's learned about compassion in the face of death and dying, and a deep insight into the nature of empathy. TEDTalks is a daily video podcast of the best talks and performances from the TED Conference, where the world's leading thinkers and doers give the talk of their lives in 18 minutes.

What A Five-year-old Taught Me About Grieving

Kate Braestrup shares the story of her husband Andy's death, and a visit from 5-year-old Nina at the viewing.

Tips to Get Through the Grieving Process - Dr. Phil

Crystal says her husband was shot and killed by a man who he thought was a good friend. The gunman claims self-defense — but was it?

In 1983, Bill’s young wife, Carolyn, died very suddenly, leaving him to cope with his loss, and to care for their 2 boys, then only 9 and 7.
At first, Bill seemed to be doing well, and many commended him that he appeared “so strong”, and “doing so well” at the time of the death. But that apparent strength was, in fact, numbness, and three months after his wife’s death, when the shock of her sudden death wore off, Bill felt like he was falling apart.

That was probably the worst time of my whole life.” writes Dr Webster. “Three months after Carolyn died, I felt a thousand times worse than I had at the actual moment. And the worst thing was that people’s expectations seemed to that, by now, after three whole months, I should be ‘getting over it’. What was wrong with me? Why couldn’t I ‘pull myself together’?”
Nobody told me that this was grief. Nobody told me what to expect, so the entire process caught me completely by surprise. What I would have given for someone to say that, while it was possibly the most difficult time of my life, that grief is a natural human experience, and reassure me that I was normal.”
Copyright Dr. Bill Webster

According to Mike Shaw “Grief Happens,” but gratitude is your foundation for healing. It’s all about perspective. Your lows give you a greater ability to appreciate new highs. Trust that you will heal. You CAN live a FULL life after grief. Mike shows you how gratitude and grieving are closely linked. He goes as far as saying that grief reveals gifts, he’s grateful for its validation, and for the balance it brings to your life. Grief Happens – but YOU can turn the tables; healing is possible. In this TED talk, learn how freestyle skiing and spinal cord injury taught Mike Shaw about gifts, perspective, gratitude and grieving. Mike is an accomplished freestyle skier, ski-coach, entrepreneur and speaker with a unique story of human triumph. His story will empower you to help the chronic grievers in your life. Learn more about Mike at http://www.mikeshawski.com

Mindy Cassel speaking at TEDxCoconutGrove at Ransom Everglades School in Miami, Florida about her observations that the loss of a loved one is not something we should get over or move past, but instead something we must integrate into our lives. Mindy is a licensed psychologist and thanatologist and the co-founder and CEO of the Children's Bereavement Center (CBC). The CBC provides free peer support to children, teens, and adults (18 years and older), and their families after the loss of a loved one. Mindy came to this work after 25 years of studying and working with individuals and families who experienced traumatic illness, accidents and major life transitions. Her doctoral dissertation was in the study of attachment and loss, which gave her the theoretical underpinnings to do her current work.

The Adventure of Grief: Dr Geoff Warburton at TEDxBrighton

Psychologist, writer and innovator, Geoff Warburton has spent the last 25 years studying love and loss. Geoff challenges conventional apathy about grief and loss by offering an approach that evokes curiosity, openness and compassion. His approach synthesises Eastern wisdom traditions, in-depth psychology and common sense. The emphasis of his message is towards thriving after loss -- and not merely surviving. He presents a perspective that challenges Western thought by saying there is no 'right' way to grieve and advocating that grief can be 'the ride of your life'. Working from both his personal and professional experiences of bereavement, he goes so far as to say that loss through bereavement can become an adventure to be had, rather than a problem to be solved.